Longrunning Kentucky festival highlights the greats and those who learned from them; Tickets available here.

March 7, 2022 – Somerset, KY – When festival organizers dreamed up the Master Musicians Festival nearly three decades ago, their idea was simple: to honor those whose contributions have had a significant effect on their respective genres and to highlight the up-and-coming acts who are carrying the torch of their forebears. For every Guy Clark they booked, a Jason Isbell shared the bill, for every Doc Watson, a Nickel Creek, and for every Willie Nelson, a Tyler Childers, highlighting a thread that runs through all generations of world-class musicians; a bonafide mastery of their craft.

This year, over the weekend of July 15-16 in Somerset, Kentucky, Master Musicians Festival, presented by the City of Somerset, will welcome GRAMMY-nominated roots-rock mainstay Grace Potter, the eclectic influences of super-trio The Wood Brothers, a long-time favorite of music fans and fellow musicians-alike, Marty Stuart & His Fabulous Superlatives, and the easy-going swagger of Rayland Baxter to the Horse Soldier Bourbon main stage. This same stage has seen the likes of the aforementioned Doc Watson, Guy Clark, and Willie Nelson, plus many more—the festival’s last few years alone saw Steve Earle, The Counting Crows, and the late, great John Prine take the stage. Additionally, acts like Boy Named Banjo, John R. Miller, and Leah Blevins will give Master Musicians Festival a taste of what the well-equipped future of this music holds.

“The MMF family is not only a collection of artists who have performed on our stages, it is a family in the most literal sense,” says Master Musicians Festival President and Media Director, Julie Harris. “Many of our board members over the years have been sons and daughters of founding members; many families and friend groups in our community have made attending MMF an annual tradition. Festivals like ours cement a generational love of and appreciation for music and community. And that is the reason we devote ourselves as volunteers to the cause—to ensure that love lives on.”

On that list is a multitude of Kentucky’s finest musicians—pickers and singers who’ve been steeped in some of America’s finest musical traditions since birth—further cementing the Bluegrass State’s legacy in history, written and yet-to-be. Beyond tradition, the land that straddles the Mason-Dixon line and the folks who inhabit it have long been influential on the music being written in Kentucky. Legendary songwriter Tom T. Hall wrote about his upbringing in Olive Hill, Kentucky, in his 1979 autobiography. “The thing that fascinated me most during my childhood were the people that I grew up with. I saw the whole environment of my early days as a large stage with parts being played by real people in real life.” When award-winning literary magazine Oxford American focused its annual music issue on the Commonwealth, Maxwell George wrote, “It’s in the water, we say when reaching to explain how so much of something so remarkable can come from the same place; in the case of Kentucky, seems we’d do better to say it’s in the bloodstream.” So, like the state itself, Master Musicians Festival has spent the last 28 years reaching into what it means to be from Kentucky—what makes the artist’s soil so fertile—and translating the feeling into a shared musical experience for the world to see.

“The rest of the world is quickly learning about Kentucky’s rich musical history and depth, and the Master Musicians Festival has been instrumental in that introduction,” Master Musicians Festival Executive Director Tiffany Finley said. “While we pride ourselves for honoring master musicians and paying homage to their talent, we are maybe best known for being the festival where you’ll hear your next favorite artist—the festival that books musicians on their rise to fame. Our uniqueness lies in the way we celebrate both of these contributions to the music industry in one two-day festival.”

Passing the torch along to the next generation is a cornerstone of the Master Musicians Festival ideology, so it only makes sense that the festival is exciting for fans of all ages. Kids 12 and under receive free admission with a ticket-holding adult and there are a plethora of activities for youngsters to enjoy. MMF partners with The Shine House Art Studio to offer a free kids camp throughout the weekend. Kids can participate in instrument making, water balloon fights, bubbles, making glow jewelry, and participating in a special music set curated just for them. This year, local Master Musician and harmonica player Tommy Cate will host the kids’ jam at 3:50 p.m. Saturday in the Somersession Tent. More details will be available on MMF’s website as the event approaches. 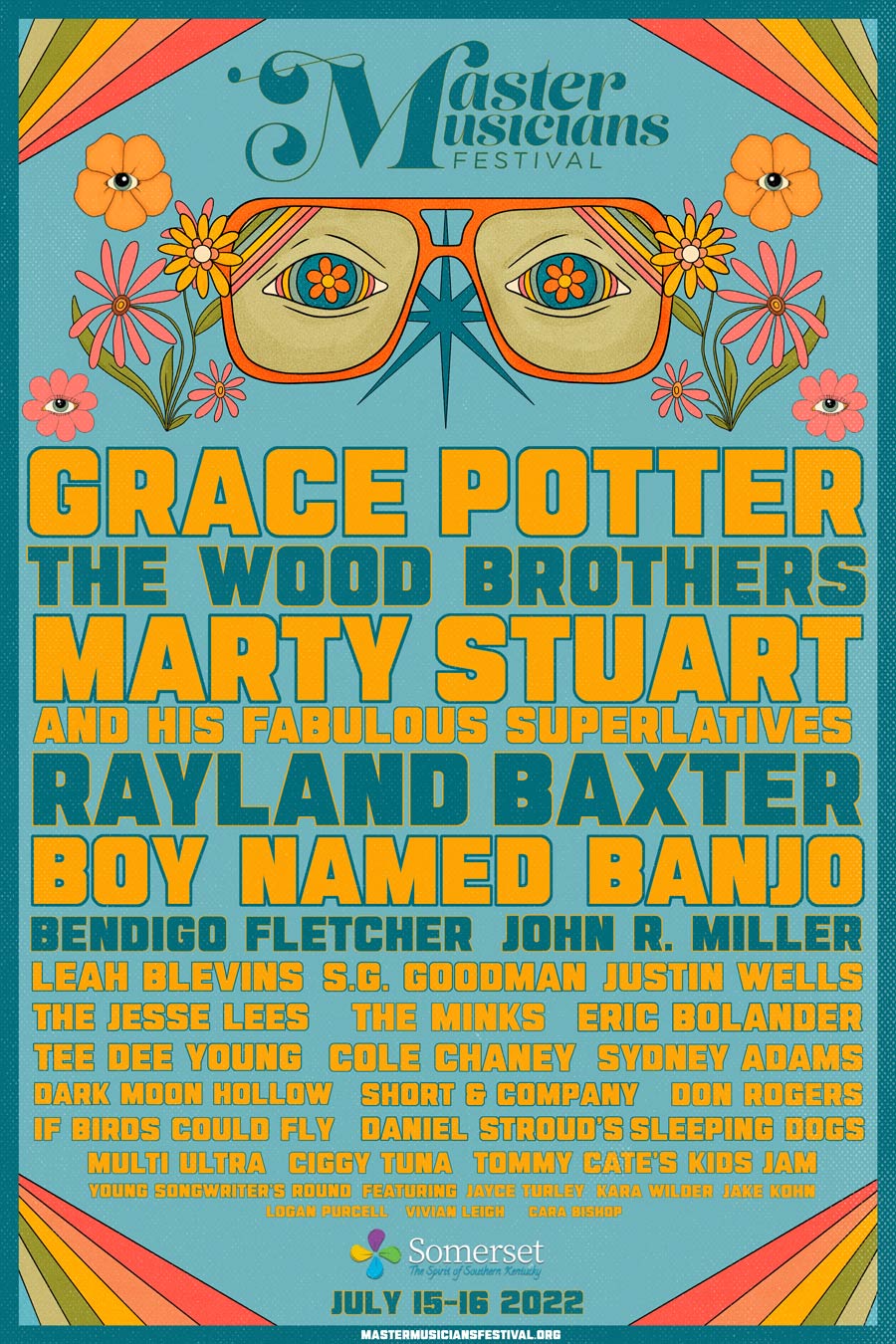